Is Oregon a Hotbed for Melanoma?

Over the last 50 years, the global rate of melanoma incidence has increased dramatically, on average between 3-5 percent per year. In the US alone, almost 100,000 new cases of melanoma will be diagnosed in 2021. Until recently, overall mortality rates for melanoma have risen as well, but the combination of early detection and more effective immunotherapy for metastatic disease are changing this trend. As dermatologists, we aim for the timely diagnosis and removal of melanoma at its earliest stages, ideally doing complete skin checks of patients at highest risk. But who is considered high risk and why?

Recently, CNN highlighted a 2020 article from The American Cancer Society and the Harvard School of Public Health comparing state-by-state incidence rates of melanoma in the US using reported cancer registry data from 2010-15. Since UV exposure causes greater than 95 percent of melanomas, many of the state rankings seem logical: Hawaii, California and Florida are all in the top ten, with Hawaii far and away the leader in new cases at 65/100,000. Conversely, the cold, northern latitude state of Alaska should have the lowest incidence rates and indeed ranks last. Yet other results seem more puzzling. Our own Oregon, for example, ranks 10th in melanoma incidence, and other states’ rankings also defy logic: Utah (2nd), Delaware (3rd), Vermont (7th) and Washington (13th). Why would these relatively northern latitude or generally cloud-covered states show such high incidence numbers relative to other states with more regular and intense sunshine? Surprisingly perhaps, the study lists the sun-drenched, desert state of Nevada as 50th in melanoma incidence! 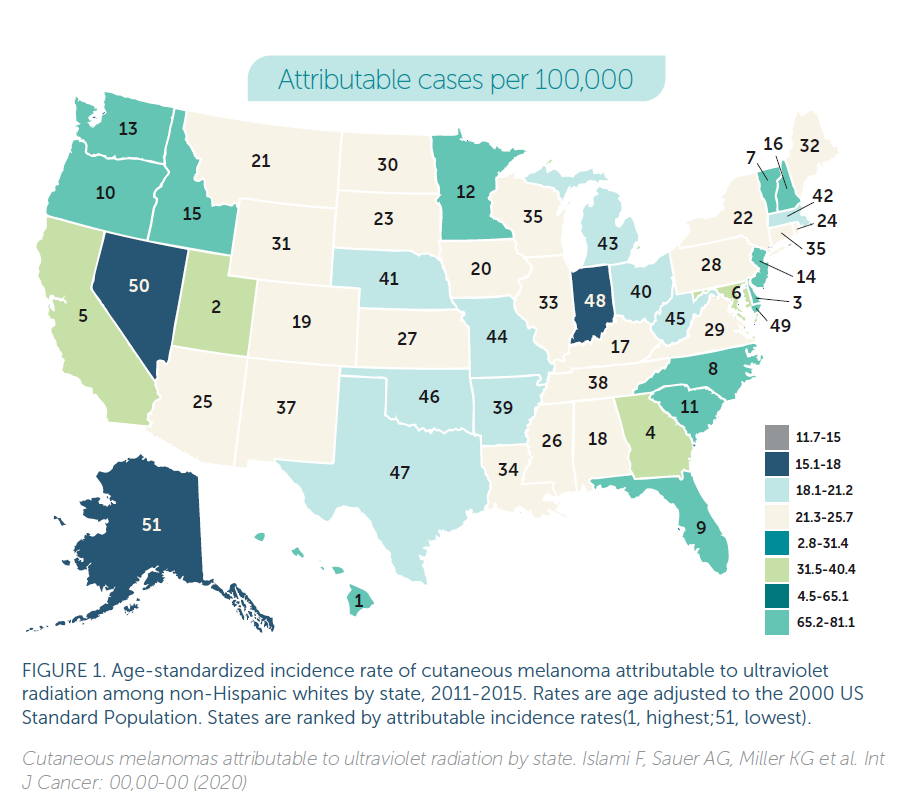 UV-induced mutations of skin melanocytes cause the vast majority of melanomas, and the best proxy for DNA damage is sunburn, particularly sunburns severe enough to cause blistering. Logically then, sunburn-prone lighter-skinned individuals with the most UV exposure should be at highest risk, and this is exactly what we find. In the US as elsewhere, incidence rates of melanoma vary by skin pigmentation, unfortunately characterized in cancer registries by self-reported ethnic groups rather than a more precise functional skin typing of pigmentation level based on ability to burn or tan. Overall US melanoma incidence rates show “Non-Hispanic Whites” (NHWs) with an average rate of 27/100,000, Hispanics/Native Americans at 4-5/100,000 and Black/Asian/Pacific Islanders at 1/100, 000. These findings are further confirmed in Australia, where history created a natural experiment of pigmentation/latitude mismatch. In their tropical climate, the pale-skinned Aussies have the highest melanoma incidence rates in the world at 75/100,000, along with the highest rates of skin cancer overall.

So can we explain the state findings by skin type? The northwest and some New England states certainly show a high percentage of lighter skinned individuals while sunny states in the south show more diverse skin types. The authors of the paper tried to control for this by listing incidence rates/100,000 NHWs. Though hard to know with certainty, it seems plausible that this demographic designation may be imperfect since it relies on self-reporting. Moreover, though the authors don’t address this in their discussion, NHW skin shows a great range of sun tolerance, with some individuals able to tan readily while others (red-heads and those with significant northern European heritage) only burn and never tan, placing them in a much higher risk group. Perhaps the prevalence of lighter-skinned NHWs is higher in some of the states with relatively higher rates? The authors tried to explain some of the counter-intuitive findings by suggesting state differences in UV strength, participation in outdoor activities, sun protection, indoor tanning and early detection efforts. Certainly altitude yields higher UV exposure with a 7% increase in UV per 1000 feet of altitude gained, but why is Utah 2nd while Colorado is 21st? And why is Texas 47th? Perhaps the NHWs in CO and TX have just enough extra pigment to protect their skin.

Although this article received widespread media attention, I do believe the lack of control for NHW tanning/burning abilities undermines its validity. So don’t panic that Oregon (or Utah) have mysterious ethers in the air or water causing melanoma. Instead, know that there are good epidemiological data defining those at higher risk for its development. Clearly, those with lighter skin who tan poorly if at all (red hair Relative Risk 3.6, blonde hair RR 2), those with lighter eye color (RR 1.5), those with a history of multiple sunburns (RR 2), particularly blistering ones, a history of indoor tanning (RR 1.15), and those people with > 100 common nevi (RR 7), or 5 or more atypical or unusual nevi (RR 6). Family history is also a factor, especially if there are either multiple melanomas in one member or multiple family members affected: parent (RR 3-4), sibling (RR 3-4), 2 first degree relatives (RR 9), or parent with multiple primary melanomas (RR 62).

How can we screen ourselves, our family members and our patients to assess our risk? Most benign nevi show good symmetry of border and color, generally having a circular to oval shape. If you see pigmented lesions that have irregular borders or asymmetry of pigment, these should be evaluated, preferably by a dermatologist. Many know the ABCD mnemonic of Asymmetry, Border irregularity, Color variegation and Diameter (>6mm), but there are exceptions as well. Rapidly growing nodular melanomas may initially appear symmetrical. Fair skinned patients may develop pink or red amelanotic melanomas, often initially thought to be a basal cell carcinoma or even a patch of dermatitis. Inflamed melanomas may appear pink and brown, clouding the assessment of symmetry. Along with regular surveillance, high risk groups should limit UV exposure by avoiding mid-day sun and seeking shade where possible, wearing sun-protective hats and clothing, and applying a broad-spectrum sunblock to exposed areas.

So perhaps Oregon and Washington have high melanoma incidence rates because our NHWs have relatively lighter skin and the state-by-state denominators can’t be truly compared? Perhaps cloud cover yields a winter pallor that burns more easily at the first glimpse of sun? This may lead to a different pattern of sun exposure with more sunburns (intermittent intense sun exposure) rather than chronic low-level exposure providing some baseline pigmentation in those who can tan. Perhaps our state’s excellent dermatologists detect melanoma at higher rates but earlier stages? I certainly like to think so. While fun to speculate, limitations of the study’s aggregated, self-reported data don’t allow better answers. And why was Nevada ranked 50th among the states in melanoma incidence? More conjecture, but I wonder if the locals know how to handle the intense desert sun while those vacationing in Las Vegas sunbathe and sunburn poolside only to return and increase melanoma rates in their home states!