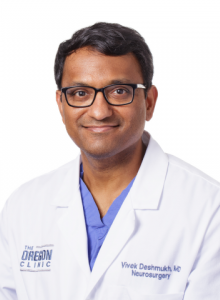 Dr. Deshmukh is the Chairman of the Department of Neurosurgery at Providence Brain and Spine Institute.

Dr. Deshmukh received his Doctorate of Medicine with Highest Honors from the University of Florida in 1998 and was president of his medical school Honor Society. After completing fellowships at the Barrow Neurological Institute, including advanced work in Cerebrovascular Neurosurgery, Dr. Deshmukh became the Director of Cerebrovascular and Endovascular Neurosurgery at George Washington University in Washington, D.C. He was recognized with a commendation on the United States Senate Floor by the Senate Majority Leader Harry Reid for his neurosurgical contribution during his time at GW University.

In September of 2010, Dr. Deshmukh and his family moved to Portland, Oregon. He is currently the Director of Cerebrovascular and Endovascular Neurosurgery at the Providence Brain and Spine Institute. Dr. Deshmukh has over 100 publications, oral presentations, and abstract presentations. His presentations and publications include work in the surgical and endovascular management of intracranial aneurysms, vascular malformations of the central nervous system, minimally invasive approaches for skull base tumors, innovative surgical approaches to lesions of the brainstem previously deemed inoperable, among others. He is a principal investigator in multiple NIH and industry-sponsored clinic trials evaluating cutting edge techniques in neurosurgery.

With his training and extensive experience, Dr.Deshmukh treats the most complex neurosurgical cases and has been instrumental in developing a nationally recognized center of excellence in cerebrovascular neurosurgery at PBSI.

Dr. Deshmukh has been recognized as one of America’s top doctors by Castle Connolly and one of the top doctors in the Portland Metro area.