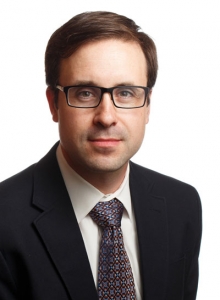 My goal is to partner with my patients in order to provide the best care possible to help them achieve their health care goals. Every patient is unique, and it is important to me to understand each patient’s perspective on their disease or symptoms so that together we can work to maximize their quality of life. In addition to forging this important therapeutic relationship, I provide my patients with state of the art diagnostic testing and treatments for a wide range of digestive health problems.

He then completed his residency and chief residency in internal medicine at Dartmouth-Hitchcock Medical Center in New Hampshire before coming to Oregon to begin his gastroenterology training at OHSU.

Dr. Anderson continues to enjoy distance running, but is counting down the days until he can no longer beat his daughters in a foot race. He lives in Portland with his wife, two daughters, and two rambunctious labradoodles.