My Patient’s MRI Shows a Pituitary Tumor: What Next?

Workup of the Pituitary “Incidentaloma” 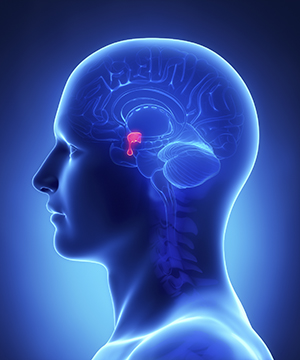 Pituitary tumors are among the most common brain tumors. Autopsy and radiology studies have placed the incidence between 14% and 22%. The incidence increases with age and overall they account for 13% of all brain tumors.
In the modern era of advanced imaging, they are a common finding. The first thing to consider is whether the patient’s symptoms that led to the MRI are related to the tumor. If the presenting symptoms are related to mass effect from the pituitary tumor (apoplexy, visual loss, cranial nerve dysfunction) or hormone excess or deficiency, then the lesion is not an incidentaloma and neurosurgical/endocrine evaluation should be undertaken.
If a pituitary lesion is unrelated to a patient’s symptoms then it is an “incidentaloma.” The most comprehensive evidence-based review of incidentaloma management was published by Freda et al.1 and many of the forthcoming recommendations are taken from that document.
Pituitary tumors are classified into macroadenomas (>1 cm) and microadenomas (<1cm). They are also traditionally separated into functional tumors (those that produce an active hormone) and non-functional tumors (those that do not). In reality, many “non-functioning” adenomas produce FSH and/or LH without clinical effect.
Hormonal effects can occur from overproduction of any of the hormones produced by the anterior lobe of the pituitary gland:  growth hormone (GH), ACTH, TSH, LH, FSH and Prolactin. The most common functional tumors secrete prolactin, GH or ACTH.  Co-secretion of multiple hormones can also occur.
Prolactin excess can result in amenorrhea and galactorrhea in women, and low testosterone, decreased libido and gynecomastia in men. Prolactinomas are typically treated with dopamine agonists as first-line therapy. All other functional tumors are treated first-line with surgery.

Growth hormone excess results in gigantism or acromegaly depending on the age of the patient and growth plate fusion. Symptoms include enlargement of the hands, feet, jaw and tongue, diabetes, cardiomyopathy, hypertension, colon polyps and cancer and nerve entrapment syndromes.
ACTH excess results in Cushing’s disease. Symptoms include weight gain, hirsutism, abdominal striae, moon face, posterior cervical fat pad, diabetes, and hypertension.
Non-functioning adenomas typically present as a result of mass effect. Headaches are rare unless the tumor has hemorrhaged or infarcted (apoplexy) but can be quite severe in this setting.  Suprasellar extension causing optic chiasm compression can result in bitemporal hemianopsia or even more extensive visual field deficits. Cavernous sinus extension can result in oculomotor or other cranial nerve compromise. Mass effect from the adenoma on the normal pituitary gland can also cause pituitary hypofunction.  Rates of gonadotropin deficiency, thyroid axis deficiency and adrenal insufficiency can be as high as 30, 28 and 18%, respectively.
Patients presenting with an incidentaloma should undergo a comprehensive history and physical directed towards identifying evidence of visual compromise, pituitary hormone excess and hormone deficiency.  Any incidentaloma that abuts or has mass effect on the optic chiasm should prompt a referral to ophthalmology for visual field testing.
Endocrine Society Clinical Practice Guidelines also recommend screening all patients with incidentalomas for testosterone, FSH, LH, free T4, TSH, 8 am cortisol, prolactin and IGF-1.  Routine screening for ACTH hypersecretion is not recommended unless Cushing’s disease is suspected based on clinical findings.
Incidentalomas that have significant suprasellar or extrasellar extension, mass effect on the optic chiasm, cause a visual field deficit, or are non-prolactinoma functional tumors should be referred to neurosurgery.  Prolactinomas and smaller tumors with evidence of hypofunction in one or more pituitary axes should typically be referred to endocrinology.
Depending on practitioner experience and comfort level, tumors not meeting the criteria for neurosurgical or endocrine referral can be followed with serial imaging. Patients with microadenomas should have a follow-up MRI 1 year after the initial study, then yearly for 3 years and then less frequently but with continued surveillance. Patients with macroadenomas should have a follow-up MRI 6 months after the initial study, then yearly for 3 years and then less frequently but with continued surveillance.  Macroadenomas should also be followed with laboratory testing to monitor for the development hypopituitarism.  Any significant change in size should prompt a neurosurgical referral.
Regardless of the size or symptoms of the pituitary lesion, a neurosurgical referral is always a reasonable way to proceed.
1. Freda PU, Beckers AM, Katznelson L, Molitch ME, Montori VM, Post KD, Vance ML; Endocrine Society. Pituitary incidentaloma: an endocrine society clinical practice guideline. J Clin Endocrinol Metab. 2011 Apr;96(4):894-904.

Fill Out the Form Below or Contact Dr. Pankaj Gore at (503) 935-8500 to Request Information for Pituitary Tumors