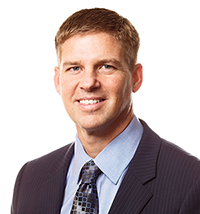 Kevin M. Reavis, MD, a surgeon with The Oregon Clinic, was installed as president-elect of the Oregon Medical Association at the OMA's Annual Meeting April 23 in Portland. He will become the association’s 143rd president in 2017.
Dr. Reavis earned his medical degree from Vanderbilt University and completed his residency in general surgery at Oregon Health & Science University, where he was inducted into the Alpha Omega Alpha Honor Society. He completed a fellowship in minimally invasive surgery at The Ohio State University before joining the faculty as an assistant professor of surgery at the University of California, Irvine and the VA Long Beach Healthcare System in Long Beach, California.
He is board-certified, specializes in esophageal, foregut and bariatric surgery in The Oregon Clinic's division of GI and minimally invasive surgery, and serves as a clinical associate professor of surgery at Oregon Health & Science University. He is an active leader in numerous national and regional surgical societies. His research interests include diseases of the foregut, surgical instrument innovation, and surgical education. Dr. Reavis has published more than 70 peer-reviewed publications and numerous book chapters, and serves on the editorial board or as a reviewer for more than a dozen medical journals.
The OMA awarded him the 2005 Presidential Citation for excellence in leadership as Young Physician Representative to the Board of Trustees. He also has served as an OMA resident trustee and on the OMA's Resident Advisory Committee, and on the association's Technology Committee.
The OMA is an organization of over 8,000 physicians, physician assistants, medical and PA students organized to serve and support physicians in their efforts to improve the health of Oregonians. Additional information can be found at www.theOMA.org.