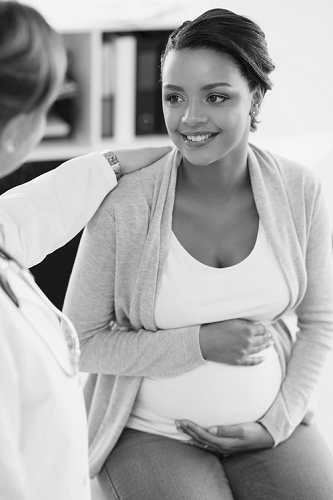 Inflammatory bowel disease (IBD) affects one in two hundred Americans and in women, it commonly presents early in life during reproductive years. Women with IBD are almost three times as likely to be voluntarily childless, although having IBD does not necessarily affect the ability to have children. Women with IBD are more likely to have a complication of pregnancy or a complication of labor and delivery. But, under the guidance of a high-risk obstetrician and gastroenterologist, a woman with IBD can have a successful pregnancy and a healthy baby.

Most patients with IBD have normal fertility in the absence of pelvic surgeries or active disease. Medications used to treat IBD do not decrease fertility, but some may be harmful for pregnancy. Appropriate contraception and pregnancy planning are crucial. An IBD flare-up at conception doubles the risk for a flareup during pregnancy. Even low disease activity increases the risk of miscarriage, pre-term delivery, or having a low birthweight baby. Pregnancy should ideally be planned for when the disease is in remission for at least three months. Long-acting reversible contraception, such as an intrauterine device (IUD) or implant, are ideal choices. Care should be taken to avoid estrogen-containing products where possible, owing to the already increased risk of venous thromboembolism in patients with IBD. Oral contraceptive pills are not absolutely contraindicated but may be less effective with active small-bowel inflammation, extensive bowel resections, or rapid bowel transit. Though patients are understandably concerned about passing IBD to their infant, the hereditability of IBD is such that the absolute risks to the infant are small in most cases. (The risk for hereditability may be higher in select ethnicities such as Ashkenazi Jews and if multiple family members are afflicted with IBD.)

IBD should be in remission, on a stable medication regimen and off steroids, for at least three months before conceiving. Steroids can be used for flare-ups but not for maintenance therapy. Active disease poses risks to both mother and baby; fortunately, most medications can be maintained throughout pregnancy and while breastfeeding. For example, mesalamine and most biologics such as Remicade and Humira should be continued. Xeljanz (tofacitinib, a new JAK-inhibitor used in ulcerative colitis) is an exception that should be stopped before conceiving and while breastfeeding. Thiopurines can be continued, though they are sometimes stopped when used in conjunction with biologics due to the risk for infection. Methotrexate is teratogenetic and should be discontinued three months prior in both women and men who are planning to conceive.

Antibiotic use should be minimized but can be used for pouchitis or perianal disease. If antibiotics are needed while breastfeeding, we recommend a penicillin-based drug such as Augmentin. Other antibiotics, such as metronidazole or fluoroquinolones, may increase the infant’s risk of Crohn’s disease.

Women with IBD may have difficulty gaining adequate weight during pregnancy. Insufficient maternal weight gain is associated with a greater risk of pre-term births and having a low birthweight baby. A dietitian can help optimize diet to minimize these risks. Deficiencies such as iron, B12 and vitamin D should be replete. Folic acid supplementation also reduces the risk of birth defects and is particularly important if using a drug that inhibits folic acid metabolism. At The Oregon Clinic, our team of gastroenterologists, advanced practice providers, and dietitians are committed to guiding our patients with IBD through family planning, pregnancy, and all phases of life.