Have You Had Your Neck Checked?

The American Thyroid Association estimates that the prevalence and impact of thyroid disease will affect a significant number of Americans: more than 12% of the U.S. population will develop a thyroid condition during their lifetime. They estimate that 20 million Americans currently have some form of thyroid disease, and up to 60% of those with a thyroid condition are unaware of it. Additionally, thyroid cancer is one of the fastest increasing cancers in both men and women. The incidence of thyroid cancer has more than doubled since 1990.

Thankfully, most thyroid conditions (including the over- or under-production of thyroid hormone and abnormalities to the structure of the gland itself, including thyroid cancer) are very treatable. Over the past several decades, advancements in screening methods (such as ultrasound and other imaging services) and treatments have seen death rates for thyroid cancer have remained very low despite the increase in incidence.

Read on to learn about…

Thyroid cancer is the fastest increasing cancer in both men and women; the incidence of thyroid cancer has more than doubled since 1990. Although this increase was at one point thought to be related to an increase in detection as a result of increased imaging capabilities and incidental findings of thyroid cancer, we have now learned that aggressive screening and evaluation of small nodules may not be the sole reason for this increase. While the highest increase of this disease is in small occult tumors (most often only visible through imaging), even instances of the larger tumors are increasing.

This evolving increase in the diagnosis of the most common type of thyroid cancer (papillary thyroid carcinoma; about 86% of thyroid cancer cases are of this type) has led many clinicians to expect thyroid cancer to overtake ovarian and colon cancer to soon become the 5th most common cause of cancer in American women. The National Cancer Institute estimated that 60,220 Americans were diagnosed and 1,850 were killed by the disease in 2013.

Who Gets Thyroid Cancer?

The majority of cases—approximately 70%--occur in women. The incidence of thyroid cancer also increases with age. Papillary thyroid cancer may occur with increased frequency in some families that have a history of breast, ovarian, or renal cell carcinoma. Approximately 9% of all thyroid cancers are associated with prior head and neck radiation exposure. The risk of developing thyroid cancer is greater if the exposure to radiation occurs at a younger age. Other risk factors may include environmental and dietary factors and genetic causes, but these have yet to be defined as significant in the medical and scientific community.

Most Patients Have No Symptoms

Most patients with thyroid cancer have no specific symptoms. Small nodules or lesions (abnormal growths in or around the thyroid that may or may not be cancerous) may be identified incidentally during an ultrasound or other imaging service while receiving care for an unrelated problem. When there are symptoms, the most commonly noticed abnormality is a mass or nodule around the neck. With appropriate evaluation, more than 95% of nodules prove to be noncancerous. On rare occasions, patients with thyroid cancer experience symptoms of pain, hoarseness, or difficulty swallowing. 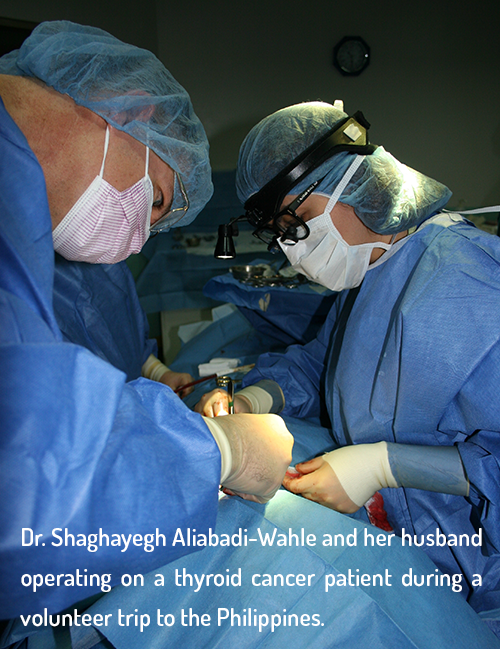 While some rare forms of thyroid cancer can be aggressive, the vast majority of thyroid cancer cases are very treatable. Treatment most often includes a combination of surgery, radioiodine therapy, and hormone replacement therapy. Despite the increase in incidence of thyroid cancer, the death rate has remained fairly flat. The bottom line? With appropriate treatment, patients with small, early-detected tumors have a long-term survival rate of nearly 100%. Unlike most other cancers, even the spread of this disease to nearby lymph nodes is not necessarily associated with a worse prognosis in many patients with the most common type of thyroid cancer. However, this is not true in older patients, where the spread of this disease to the lymph nodes can potentially predict a worse prognosis.

What Are Some Other Thyroid Issues?

While thyroid cancer, goiter (swelling caused by an enlarged thyroid gland), and nodules (lumps or abnormal masses within the thyroid) comprise most causes of structural problems of the thyroid, certain conditions also affect the function of the gland, such as hypothyroidism or hyperthyroidism—when the thyroid produces respectively too little or too much of thyroid hormone. While hyperthyroidism is somewhat rare (The American Association of Endocrine Surgeons estimates that about 1% of Americans have this condition), an estimated 30 million people suffer from hypothyroidism.

What Can I Do to Prevent These Issues?

The American Thyroid Association recommends obtaining a thyroid blood test at the age of 35 and then every 5 years thereafter.  The American Association of Clinical Endocrinologists recommends performing a simple neck check self-exam to help with early detection of thyroid disease.

It is always important for individuals, and especially women, to have a general sense of what is normal for them. If you experience changes in how you feel that may be consistent with thyroid disease or notice a growth or a lump in your neck, you should discuss these changes with your physician. Additionally, anyone who has symptoms of thyroid abnormality or has family history of thyroid disease should talk to their doctor to see whether it’s appropriate to be evaluated for thyroid disease. Sharing responsibility for your health and being an advocate for yourself is a great way to detect thyroid issues early on