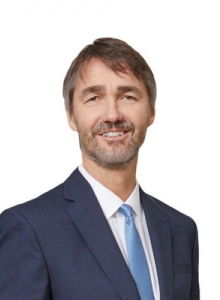 I spent 10 years in surgical training, developing the technical skills I would use for a career in minimally invasive surgery as well as liver and pancreas surgery. My real education, however, came over the last 20 years of my practice where I have learned to apply these skills individually to patients. Each patient presents a unique set of challenges, both medical and social. Meeting my patients and taking the time to understand them and their desires and expectations ultimately help assure that they get the best outcome possible.

Dr. Paul Hansen grew up in Montana and the Pacific Northwest. He graduated Cum Laude from the University of Washington in 1984 and AOA with honors from the University of Washington Medical School in 1988. He trained in general surgery at UC San Francisco (’88-’95), where he also spent two years on an NIH Trauma fellowship studying sepsis and critical care (‘91-‘93). This was followed by two years of advanced laparoscopy fellowships at UCSF (‘95-’96) and Legacy Portland (’96-’97) hospital with Dr. Lee Swanstrom. Finally, he completed his training at the Royal College of Medicine in London, UK to studying liver and pancreas surgery in (’97). Dr. Hansen’s current positions include the Medical Directorship of Surgical Oncology, and the co-Director of the Hepatobiliary and Pancreatic Surgery Program at Portland Providence Cancer Institute in Portland, Oregon.

His primary field of interest has been the development of minimally invasive approaches to major liver and pancreas surgery. These pioneering efforts have led to authorship of more than 70 peer-reviewed journal articles and more than a dozen book chapters. Dr. Hansen holds leadership positions in several regional and national professional associations. He is the past chair of the Education and Training Committee for the AHPBA, as well a member of the Program Directors Committee. He was given the ‘Clinical Excellence’ Award by the Society of the Americas Gastrointestinal and Endoscopic Surgeons (SAGES) in 2009. He is the past Oregon State Chair for the Commission on Cancer and a member of the Executive Committee for the Oregon Chapter of the American College of Surgeons. As the Medical Director for Surgical Oncology of the Portland Providence Cancer Institute, he oversees development and management of 6 subdivisions of surgical oncology.