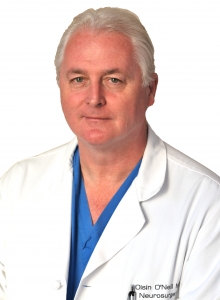 Dr. O’Neill is a board-certified neurosurgeon in the United States as well as in the European Union. He completed his medical training at the Royal College of Surgeons in 1985 and his neurosurgery training started in Richmond and Beaumont hospitals in Dublin, Ireland. In 1988, Dr. O’Neill and his family immigrated to the United States where he received neurosurgery training at the University of Washington and at Oregon Health & Sciences University. In 1991 he was examined and admitted as a Fellow of the Royal College of Surgeons in Ireland. Dr. O’Neill’s particular interests are in the treatment of brain tumors, stereotactic radiosurgery, and in the surgical treatment of the vascular pathology of the brain. Dr. O'Neill has extensive peer-reviewed publications and book chapters.