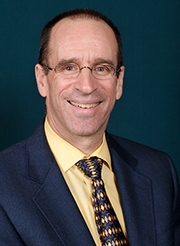 Lou Libby, MD, pulmonologist and critical care physician at The Oregon Clinic, was recently appointed president of the ALS Association of Oregon and SW Washington. As president, Dr. Libby oversees the strategic direction and operations of the association. Dr. Libby is also a physician at Providence ALS Center, a service of The Oregon Clinic, Providence Brain and Spine Institute, and the association. Dr. Libby has been committed to treating ALS patients throughout his 30-plus year career.
ALS (amyotrophic lateral sclerosis), which took the life of baseball legend Lou Gehrig, is a progressive, neurodegenerative disease that afflicts 30,000 people in the United States. There is an estimated ALS population of 500 in Oregon and SW Washington.
Supporting people living with ALS and their families has become a large part of Dr. Libby’s life. Before signing on as president, he previously served as vice president and was one of the chapter’s founding members. As a committed and passionate supporter, he has been an active fundraiser and volunteer, particularly during the Association’s major fund-raising event, the Walk to Defeat ALS®, which takes place in September each year.
“I am astounded by what we do,” Dr. Libby said. “This chapter has great energy. I want to translate the energy to successfully furthering the progress of our mission to treat and cure ALS while also helping families living with the disease.”
The local chapter of The ALS Association serves hundreds of people living with ALS and their families in Oregon and Southwest Washington each and every year. Fundraising efforts help support internationally-driven research, nationwide advocacy, local care services and specifically, the partnership with the Providence ALS Center. Thanks to successful fundraising from the local community, the chapter gave an extraordinary gift to further its commitment to ALS research earlier this year at its 10-year anniversary event. The chapter plans to implement a pilot program that will enhance its commitment to providing in-home care to ALS families.
“We are thrilled to have Dr. Libby serve as our board president. His commitment to help and support families is unparalleled. In the next few years our chapter has aggressive plans to offer more resources for families living with ALS,” says Lance Christian, executive director for the local chapter. “Having Dr. Libby in a leadership position for our organization will help us provide more services as well as support research that will lead to a treatment for ALS.”
About Providence ALS Center
Providence ALS Center is a unique collaboration between The Oregon Clinic, Providence Brain and Spine Institute, and the ALS Association of Oregon and SW Washington. Dedicated to treating people affected by ALS, it is the only ALS Association-certified Center of Excellence in Oregon offering a multidisciplinary approach to ensure ease and excellence. Emphasis is on treatment, coordinated care, education and early intervention to manage symptoms.
Providence ALS Center is led by medical director Kim Goslin, M.D., PhD, also a physician with The Oregon Clinic [now a physician with Providence]. The center provides for people with ALS by offering a “one-stop shopping” approach to complete care. While each patient remains comfortably in one room, specialists take turns examining the patient, answering questions and making recommendations.
Physicians at The Oregon Clinic also involved in treating ALS patients at the center are: Dr. Michael Phillips, Gastroenterology - East, and Dr. Andy Pedersen, Ear, Nose & Throat - Plaza. Providence Brain and Spine Institute neurologist Steven Day, M.D., also sees patients at the center.
About Lou Libby, MD
Dr. Libby is board certified in critical care medicine, pulmonary medicine, sleep medicine and internal medicine. He is a physician within The Oregon Clinic - Pulmonary, Critical Care & Sleep Medicine as well as a medical staff member at Providence Portland Medical Center and Providence Milwaukie. He is the past chairman of the American Thoracic Society (ATS), Clinicians Advisory Committee and continues to serve on that committee; the ATS Task Force for Research Fundraising as well as the Clinicians Nominating Committee and the Publications Policy Committee. In addition, he is also a member of the Research Committee of the National ALS Association.
Dr. Libby has received numerous awards and accolades, including the ATS Breathing for Life Award (2011), Mission Medal Award from Providence Portland Medical Center (2002) and the Outstanding Clinician Award from American Thoracic Society (2007). Portland Monthly Magazine has highlighted Dr. Libby in its annual list of "Top Doctors" since its inception (2004-2011). Dr. Libby has received teacher of the year honors at Providence Portland Medical Center three times, in 1989, 1991 and 1994. He most recently served as vice president as well as chief medical officer of The Oregon Clinic.
He graduated from George Washington University School of Medicine with distinction and later completed his internship, residency and became chief resident in Internal Medicine at the University of Colorado School of Medicine. He completed his fellowship in pulmonary and critical care medicine also at the University of Colorado School of Medicine. For more information about Dr. Libby, please visit his provider profile: http://www.oregonclinic.com/our-team/louis-libby